Macau is a tiny place; a mere pimple on the bum of China, but its impact on the world has been significant. By the year 1600, Macau had already had an influence on China, most notably on diet.

According to historian and author, Austin Coates, a number or fruits and vegetables were introduced into China from Macau including sweet potatoes, peanuts, watercress, pineapples, custard apples and chillies. Shrimp paste was another foodstuff transplanted from Portugal’s widely spread empire. Where would Chinese cuisine be today without peanut oil? Or Szechuan dishes without chillies?

Most of these crops originated in the Americas.  Early Spanish explorers are believed to have taken the sweet potato from the New World to the Philippines, from where Portuguese traders introduced the crop to China via Macau around 1590.

Watercress is known by the Cantonese as xiyang cai or Western Ocean vegetable, Western Ocean being a colloquial name for Portugal.

Custard apples (another native of the Americas) are called ‘foreign devil’s lychee’ in Macau, recognising that they were introduced by Europeans. Interestingly custard apples are called Sakya in Taiwan because the skin of the fruit resembles the tightly curled hair on some Sakyamuni Buddha statues. 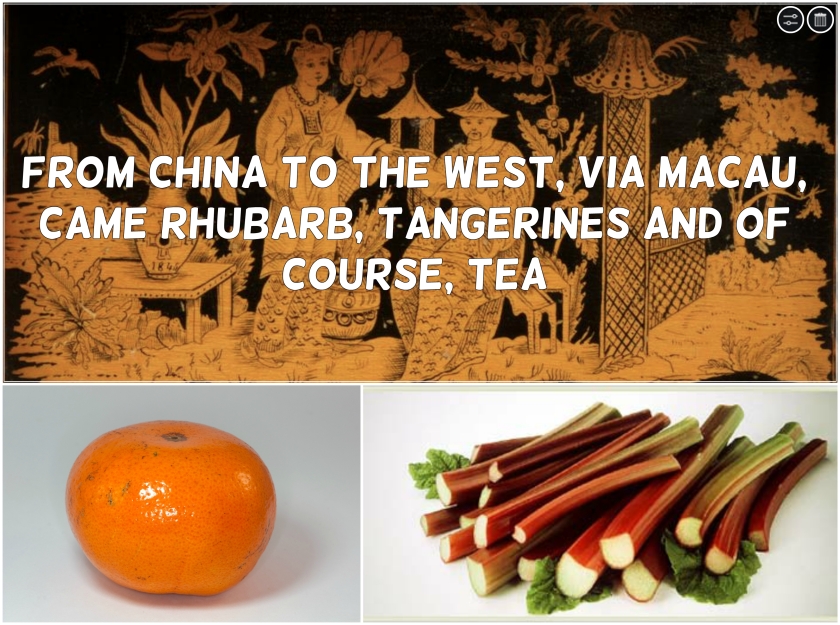 But the dietary interchange was not all in one direction. From China to the West came rhubarb, tea and mandarin oranges. The Portuguese transplanted the mandarin to Tangier in Morocco, then under Portuguese control, from where we obtained the word tangerine. (In Gulf countries, the Arabic word used for orange is the same as their word for Portugal.)

Rhubarb had long been cultivated in China for its medicinal, laxative qualities. Marco Polo wrote about it in his travel journals but it was not until the Portuguese settled in Macau that shipments began in bulk. Demand from Europe was such that the Chinese assumed Europeans to be a very constipated race.

Chinese tea had long been known about in the West but again traders based in Macau, many of them British, were the first to open up the market and begin shipping tea in bulk to Europe.

Chinese boars were another important export though Macau for cross breeding with European pigs to improve the standards of European pork.

It is not only China’s diet that was influenced by Portugal. Tempura, which we think of as a quintessential Japanese dish, was introduced by the Portuguese via their trading settlement and missionary base in Nagasaki. The name probably came from quattuor tempora, Latin for those periods when Catholics refrain from eating meat. Tempura may have originated from the Portuguese battered vegetable dish called peixinhos da horta, or ‘fish from the garden’ which resembles tempura (though not as tasty due to lack of dipping sauce).

One thought on “Macau, Rhubarb and Custard Apples”