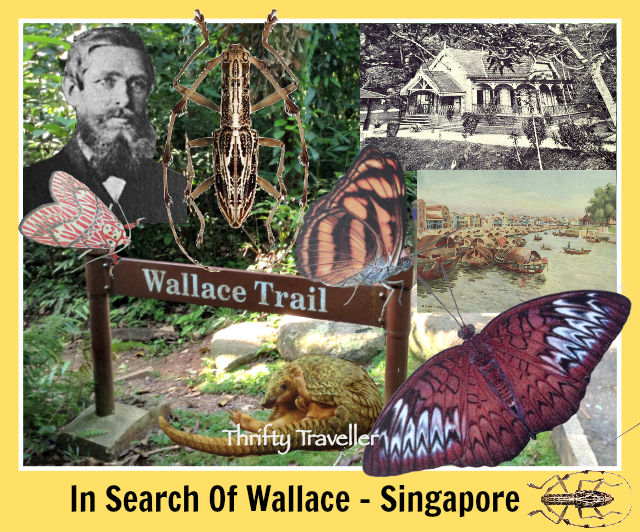 Singapore was Wallace’s first point of call on his Malay Archipelago odyssey and he returned there a number of times during the following eight years. Singapore was then, as now, a convenient base for travels within the region.

His short chapter on Singapore provides a colourful summary of the hustle and bustle of the bazaar and the waterfront and a description of the different races and their occupations. His various letters written upon arrival in Singapore give more details of his early days there:

“I landed at Singapore on the 20th of April [1854], after a 46 days’ passage from England without any incident out of the common.”

He travelled as far as Alexandria on the P&O paddle steamer Euxine. From Suez he took the Bengal as far as Ceylon before transferring to a smaller paddle steamer, the Pottinger . He would have been relieved that the trip was without incident. On his previous ocean voyage returning from the Amazon in 1852 his ship caught fire and sank and he spent ten days in a lifeboat before being rescued.

“For a week I was obliged to remain in the town at an hotel, not finding it easy to obtain any residence or lodging in the country.”

It is thought that he stayed at the London Hotel, overlooking the Padang. Formerly the private residence of Edward Boustead, the London Hotel was renamed Hotel de l’Esperance and again in 1865 as Hotel de L’Europe. It was demolished in 1900 and a new Grand Hotel de l’Europe took its place.

Few of the buildings that were around in Wallace’s time survive today but St. Andrew’s Cathedral (1861), the Armenian Church (1835) and Caldwell House (1841) are three Singapore landmarks that he might recognise.

“During this time I examined the suburbs, and soon came to the conclusion that it was impossible to do anything there in the way of insects, for the virgin forests have been entirely cleared away for four or five miles round (scarcely a tree being left).”

Only a few decades had passed since the founding of Singapore by Raffles but already Wallace could foresee that this was a city destined for rapid expansion.

“It is apparent that but few years can elapse before the whole island will be denuded of its indigenous vegetation, when its climate will no doubt be materially altered (probably for the worse), and countless tribes of interesting insects become extinct.”

Wasting no time, Wallace proceeded to Bukit Timah in the interior of the island to hunt for his specimens.

“In the interior of the island the Chinese cut down forest trees in the jungle, and saw them up into planks; they cultivate vegetables, which they bring to market; and they grow pepper and gambir, which form important articles of export. French Jesuits have established missions among these inland Chinese, which seem very successful. I lived for several weeks at a time with the missionary at Bukit-tima, about the centre of the island.”

I visited the area last week. The mission house where he stayed is now known as St Joseph’s Church.

In the entrance of St Joseph’s I found this old photo with the caption ‘St. Joseph Church during the 1800s.’

Wallace’s host and friend at the mission house was the French parish priest Rev. Fr. Anatolius Mauduit and Wallace spoke highly of him in The Malay Archipelago. Mauduit’s tombstone used to be embedded in the aisle of the old St. Joseph’s church but, since the church’s demolition, it is now propped up rather indecorously on an embankment in the cemetery.

“The mission-house at Bukit-tima was surrounded by several of these wood-topped hills, which were much frequented by woodcutters and sawyers, and offered me an excellent collecting ground for insects. In about two months I obtained no less than 700 species of beetles, a large proportion of which were quite new, and among them were 130 distinct kinds of the elegant Longicorns (Cerambycidae), so much esteemed by collectors. Almost all these were collected in one patch of jungle, not more than a square mile in extent, and in all my subsequent travels in the East I rarely if ever met with so productive a spot.”

Singapore National Parks Board set up the Wallace Education Centre and a short 1km Wallace Trail in 2009 within the Bukit Timah Nature Reserve, one of Singapore’s last remaining green spaces. A signboard on the trail tells how Wallace was fond of durians. This is something I have in common with the great man.

“The more you eat of it the less you feel inclined to stop.” – letter from Wallace to Sir William Jackson Hookay.

The Wallace Education Centre, which occupies a former dairy farm building, contains information about Wallace, including this photo of him taken in Singapore in 1862, just as he was about to return to UK for good. It was the only known photo of him during his whole Malay Archipelago trip. He looks remarkably well considering his eight years of privations and frequent bouts of fever.

How has Bukit Timah Nature Reserve changed since Wallace’s day? Well there are no tigers anymore, something which Wallace was most concerned about during his hours in the forest. Insect life too would have changed, since the logging and sawmill activity, which was such a good source of insects, is no more. But there are still reckoned to be 10,000 species of beetle here, more than enough to keep him busy for a few days.

Next Instalment: Palembang, Sumatra (in April).

2 thoughts on “In Search Of Wallace – Part 3: Singapore”