When I asked my son if he would like to stop over in Istanbul for a few days on our way back to Malaysia from England, he was very enthusiastic about the idea.

It turns out that Istanbul (or rather, Constantinople, as it was then) is the setting for one of his favourite Play Station games, Assassin’s Creed Revelations. He thought it would be fun to visit some of the actual locations where the game’s action is supposed to take place.

I have watched him play Assassin’s Creed. I can’t pretend to understand what it is all about. It seems to involve a lot of aimless walking and running, scaling impossibly sheer walls, perching on lofty eyries and jumping from enormous heights to land safely in conveniently placed carts of straw. Oh, and quite a few acts of random murder!

While I am not qualified to comment on the game play, I am impressed with the artwork and the game’s designers have done a fantastic job at meticulously recreating the streetscapes of Renaissance era Constantinople, from which period many of Istanbul’s most famous landmarks still survive.

We managed to find many of the locations portrayed in the game (compare the Assassin’s screenshots on the left with our photos on the right) : 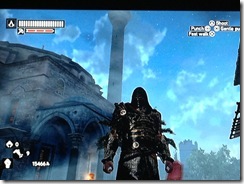 Kucuk Ayasofya Mosque (or Little Hagia Sophia Mosque) was built in 527 as a church, the Church of Sergius and Bacchus, for the Byzantine Emperor Justinian I. It was converted into a mosque in 1505, just 6 years before Assassin’s Creed Revelations is supposed to be set. 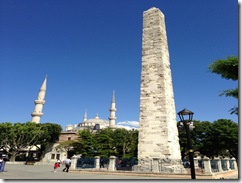 There are two obelisks in what used to be the hippodrome, built during Roman times for chariot racing.

This looks like Disneyland but is actually the entrance to Topkapi Palace which was home to the Ottoman Sultans for 380 years. In the game, Master Assassin Ezio has to sneak in here without being noticed by the guards. I was tempted to do the same to avoid the exorbitant TL40 entrance fee!

The tower is built above the entrance to the harem section of Topkapi Palace. Although Assassin’s Creed is an 18+ game,  Ezio has no access to the harem. Modern day tourists however can get in for an additional 15 Turkish Lira. 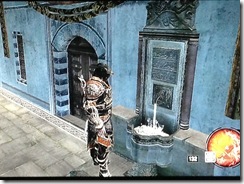 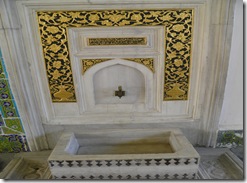 Could this be the same fountain? 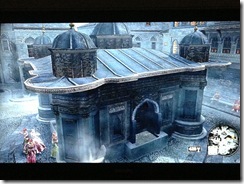 The Hagia Sophia is one of Istanbul’s most famous landmarks. This mosque, like its little sister, began life as a church. Its minarets, mihrab and madrasah were added by Mehmet II The Conqueror. The building has served as a museum since 1935. 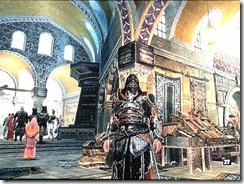 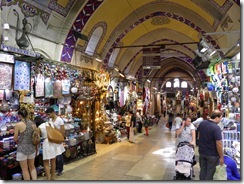 The Master Assassin goes to the Grand Bazaar to meet with Piri Reis, a famous cartographer, and collect bombs from him. Nowadays there is a Piri Reis shop at Ataturk Airport. There are no assassins in the Grand Bazaar these days but only the strongest willed of tourists can pass through its 18 gates, 65 streets, 21 caravanserais and 4000 shops with their wallets intact.

Ezio likes to climb the outside of Galata Tower and perch on top of the spire for a bird’s eye view of the city. Modern tourists have to go up by lift and pass through a night club/restaurant before reaching the panoramic viewing deck.

This is a modern day Assassin’s eye view over the Golden Horn taken from the top of Galata Tower. 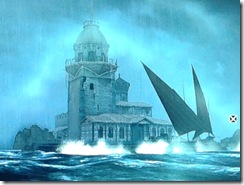 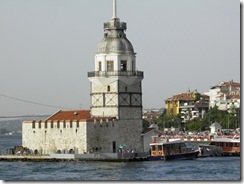 The Maiden’s Tower is situated on a small island on the Bosphorus, guarding the approaches to the city. As long ago as 410BC, iron chains were stretched between the island and Sarayburnu to prevent vessels from passing without permission. Today the tower is used as a restaurant.