In the early hours of 3rd January 1911 police quietly took up positions outside a tenement flat at No. 100, Sidney Street in London’s Whitechapel District. They had received a tip-off that armed criminals were holed up there. These men were suspected to have taken part in a jewellery robbery in Houndsditch a fortnight earlier in which three policemen had been killed.

Once in position, the police, perhaps unwisely, threw stones at the first floor window to get the attention of the criminals. They were met with a hail of bullets, injuring a police inspector. Thus began a prolonged siege, which became known as the Siege of Sidney Street. 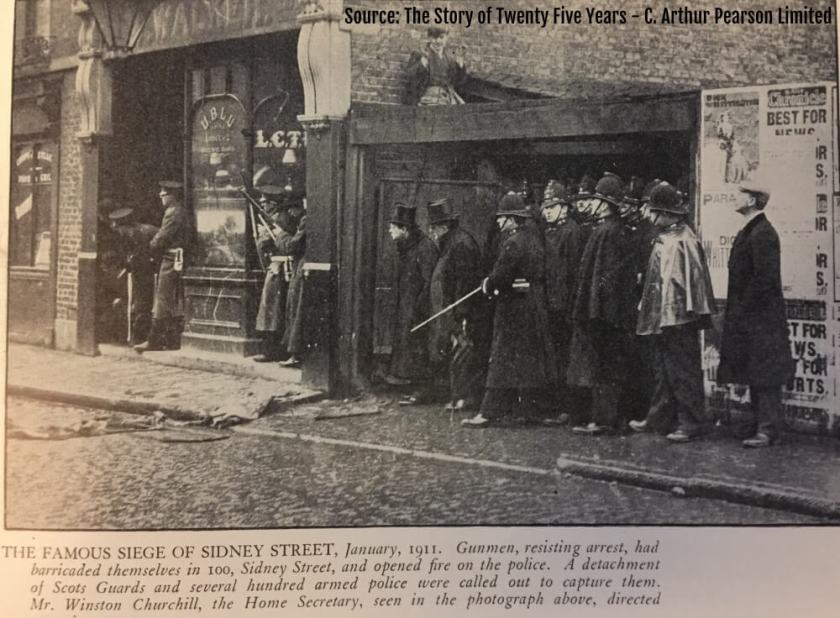 On hearing of the incident, the Home Secretary of the day, Winston Churchill, sensing a chance for self-promotion, rushed along to take personal command. Finding the police equipped only with out-of-date firearms he ordered a detachment of Scots Guards from the Tower of London to assist. 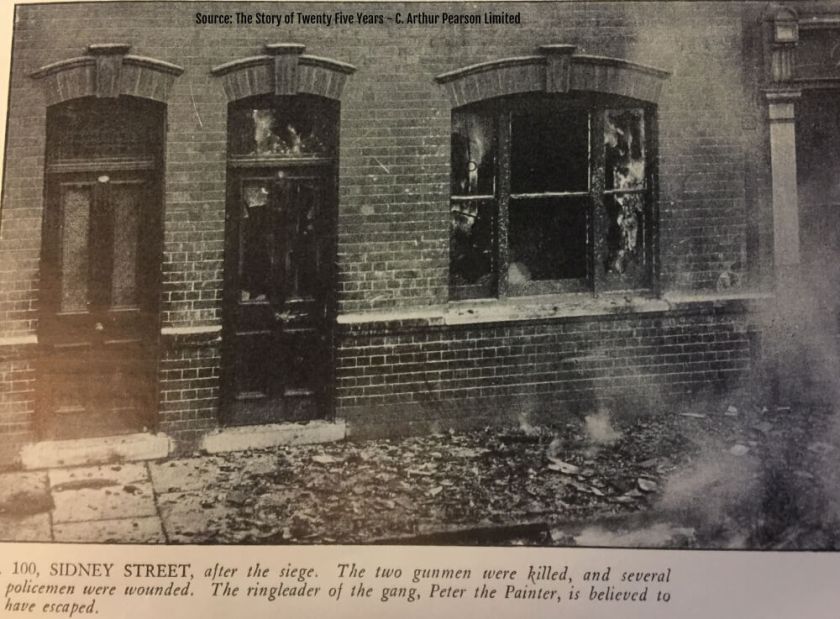 After several hours of unremitting gunfire, the house caught fire and eventually the shooting stopped as the flames took hold. Once the fire was out, police found two charred bodies in the debris.  These were later identified as Fritz Svaars and William Sokolow, petty criminals from Latvia.

The alleged leader of the jewellery robbers, Peter the Painter, was nowhere to be found and was believed to have escaped. Peter the Painter’s real name was thought to be Peter Piaktow, a Polish decorator. Interesting that even 100 years ago, Londoners were dependent on Polish handymen to maintain their houses!

One of the police detectives at the scene later claimed to have seen Peter the Painter in Australia while others believe he may actually have been Jacob Peters who became Stalin’s deputy head of secret police before being executed.

The most surprising part of this story for me was that the two deceased criminals were known to have at one time frequented the Jubilee Street Anarchist Club, just around the corner from Sidney Street. Bomb-lobbing anarchists, hell-bent on revolution, are not the sort of people you would expect to have a club. But on further checking, it seems the meaning and image of anarchists has changed over the years. At that time there were at least 3 anarchist clubs in London. The one at 165 Jubilee Street was opened under the guise of a Jewish Friendly Society and catered mainly for Jewish émigrés fleeing persecution from Tsarist Russia. It served more as a refuge and it was described as peaceful and friendly with a library and reading room, a kids’ Sunday school, lectures, dances, recitals and no alcohol. The police would often point homeless East European refugees in the direction of the Anarchist Club knowing they would get looked after. No doubt many of their members would have held leftist and communist views and there were probably a few hotheads among them – this was after all only a few years before the Russian Revolution – but nowadays these people would likely be labelled Corbyn supporters rather than anarchists.

What would the members of Jubilee Street Anarchist Club have made of today’s Whitechapel? They might wish they had hung on to their old premises. Their club was demolished but this terraced house with the blue door diagonally opposite where the club stood is on the market today for a cool £1,500,000.

Despite the inflated property prices however, the area is still an area inhabited by immigrants with a lot of social housing. The Jewish population has largely moved on and today’s residents originate mainly from Bangladesh and other Muslim countries.

The anarchist club members would have been amazed that Tower Hamlets Borough Council, which has always been at the radical end of London politics, in 2006 named two of the their community housing tower blocks Peter House and Painter House, much to the annoyance of the Metropolitan Police who felt the buildings would be better named after the Houndsditch burglary victims rather than an accused cop-killer.

Another nearby block is called Siege House.

The Sidney Street Siege affair led to a clamour among British newspapers for more stringent regulations regarding the entry of foreigners into Britain. That sounds familiar!

You can read more about London’s Anarchist Clubs here.