To make the most of my short time in Surabaya earlier this month I decided to join a 7 hour walking tour of the city arranged by Surabaya Johnny Walker Tour.

I’m glad I did because my guide Anitha showed me places that I would never have found on my own and introduced me to street snacks that I would not otherwise have tried. 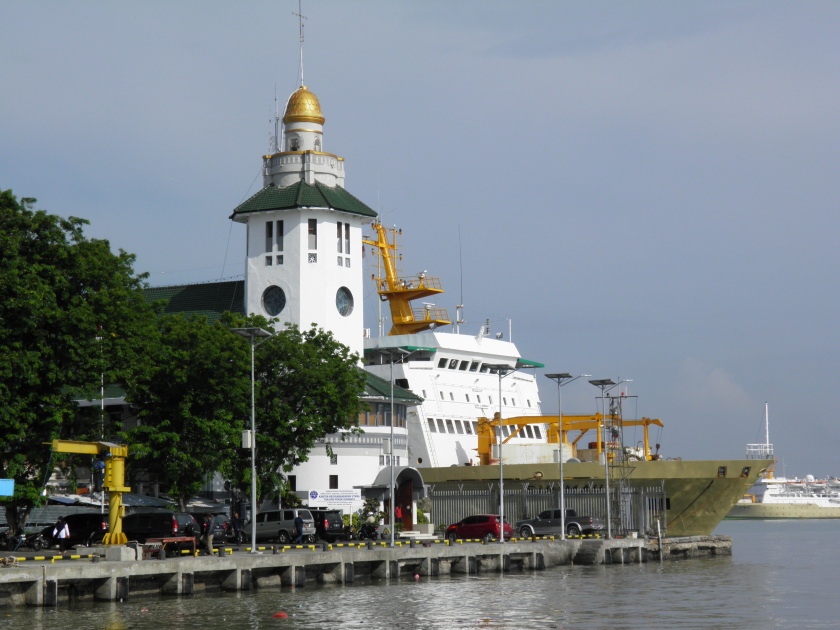 We toured the historically European, Chinese and Arab quarters of Surabaya but first took a ferry ride to the nearby island of Madura.

The ferry departs from Tanjung Perak which was the busiest port in the Dutch East Indies during colonial times. It is still busy with many cargo shops moored offshore.

Surabaya is also a naval base and home to Indonesia’s Eastern Fleet. A dozen or more frigates could be glimpsed here.

The ferry was the only way for vehicles to reach Madura Island until the 5 km long Suramadu Bridge was opened in 2009.

On arrival at Madura we took an angkot (mini van taxi) to see the colourful food stalls at the local Kamal Market (nothing to do with camels). 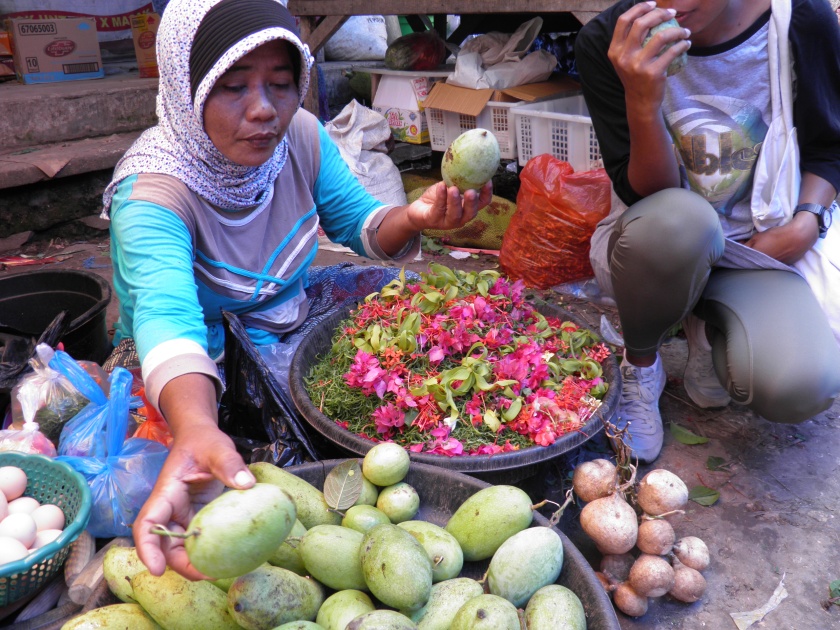 This lady was selling green mangos. The flower mix is used to throw in the sea as part of funeral rituals. 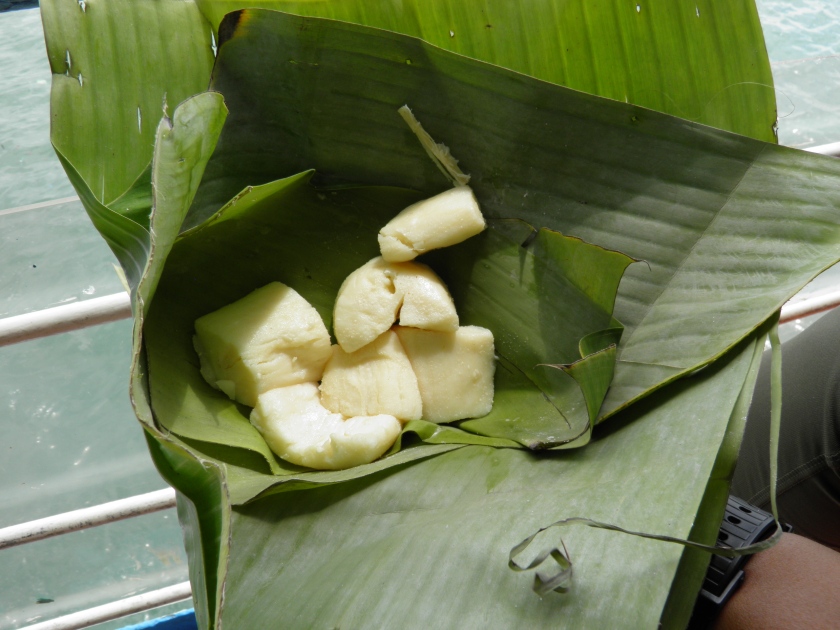 Fermented cassava (tape) was a snack I’ve not tried before. It has an alcoholic taste and is said to be good for stomach problems and to ease menstrual pains. 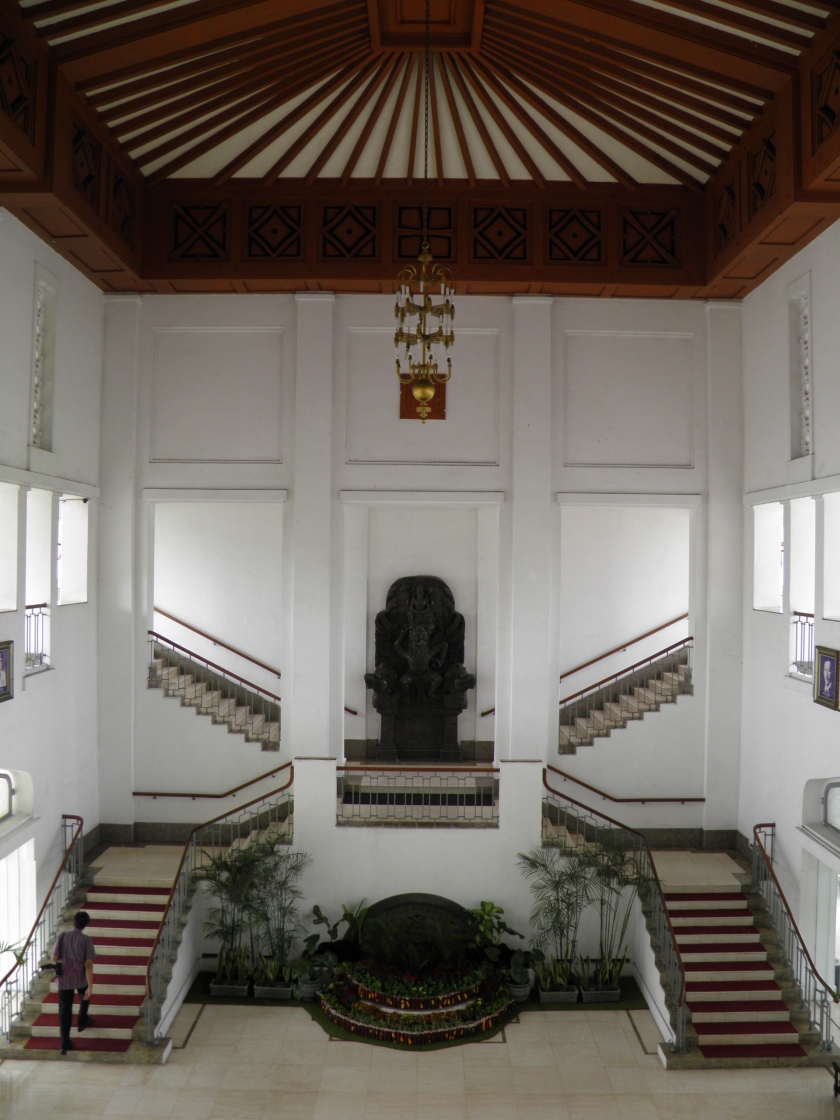 Returning by ferry to Surabaya we next took a bus to the Governor of East Java’s office, built by the Dutch in 1931 in the type of colonial art-deco style that is quite common here.

This historic building was built in 1911 for a Dutch trading concern called Lindeteves-Stokvis. The Japanese army took over the building during the war for use as a vehicle and weapons workshop. 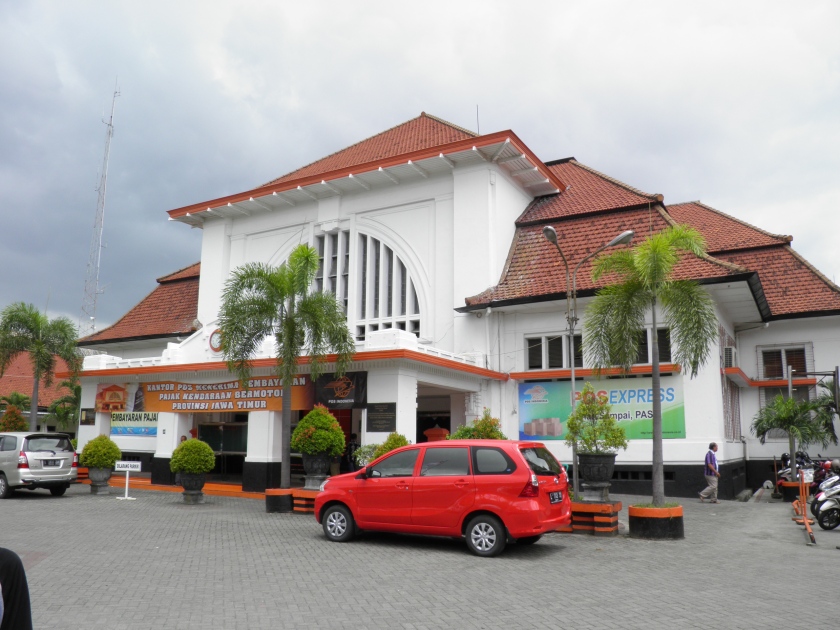 This is Surabaya’s main post office which previously functioned as Hogere Burgerschool where the first Indonesian President, Soekarno received his education. 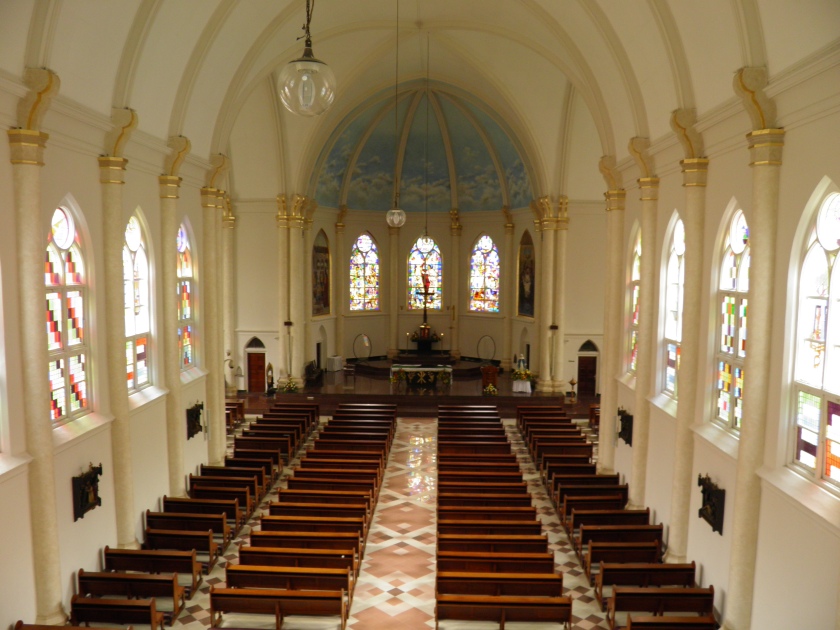 Work on this gothic styled catholic church, Santa Perawan Maria Kepanjen, began in 1899. It was completely gutted by fire during the Independence disturbances in 1945 before being restored.

The police museum, Museum Aktif Kepolisian, was quite interesting and in a lovely old building.

After leaving the museum the heavens opened and we got totally drenched, despite umbrellas. That is one disadvantage of organising walking tours in a tropical climate. A couple of times we had to hire a becak, the Indonesian name for bicycle trishaws, in order to negotiate the narrow lanes which had turned into rivers of rainwater.

Next we dripped all over the floor of the old De Javasche Bank which is now a museum. They displayed specimens of changing banknote designs over the decades. Interesting that the Japanese WW2 banknotes retained the Dutch language and currency.

Another bank museum, the Bank Mandiri Surabaya Kembang Jepun Museum, (formerly a branch of Nederlandsch Indische Escompto Maatschappij)  was full of stuff that reminded me of my former career, like ledger books, protectograph machines, and early computers. There were some staff records too from the 1930s.

The building itself was another Dutch design built in 1928. The stairwell is decorated with the flags and motifs of various Dutch and Indonesian cities. Kembang Jepun by the way translates as ‘Japanese flower’ and was a euphemism for the red light district. Japanese prostitutes were common throughout South East Asia from the early 20th century up until WWII.

Our tour through the Chinese Quarter of Surabaya was rather curtailed due to the weather and anyway, coming from Malaysia, much of it looks the same as we have at home. But we visited Shin Hua, a traditional barber shop that has been around for 75 years and still has ancient razors, scissors and ear-cleaning sets from those early times.

We broke for a sweet soup made of barley and mong beans which was tastier than it sounds. When the owner found out that I used to live in Hong Kong she started chatting to me in Cantonese but soon discovered that my rusty vocabulary is rather limited.

Next we went to a colourful and pungent covered market selling everything from red onions to lemongrass to chillies. Thanks to the heavy rain, the floor of the market had become a muddy soup floating with onion skins and the odd rat!

Before long we were in the Kampung Arab, a part of town where many of the residents are descendants from earlier generations of seafaring Yemenis from Hadhramaut, who, on coming ashore in Surabaya, decided they weren’t going back. They intermarried with local ladies and the faces we encountered here ranged from looking quite Arab to completely Indonesian. Many of them speak some Arabic and I was once again able to impress my guide with my language skills and tales of living in Yemen.

We stopped here for an unusual coffee in a tiny lean-to establishment. Unlike Middle Eastern qahwa arabiya, which is watery black coffee enhanced with cardamom pods, this version was stronger and also laced with ginger and cloves and a lot of sugar. Not bad!

This covered souk leading to the Ampel Mosque sells perfumes, prayer beads, Islamic style clothing and much besides. The mosque has five gateways, representing the Five Pillars of Islam. 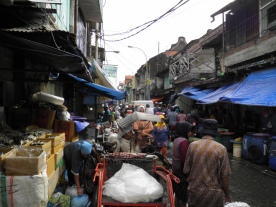 Nearby is the fish, perfume and spice market which together fill the nostrils with a heady aroma. 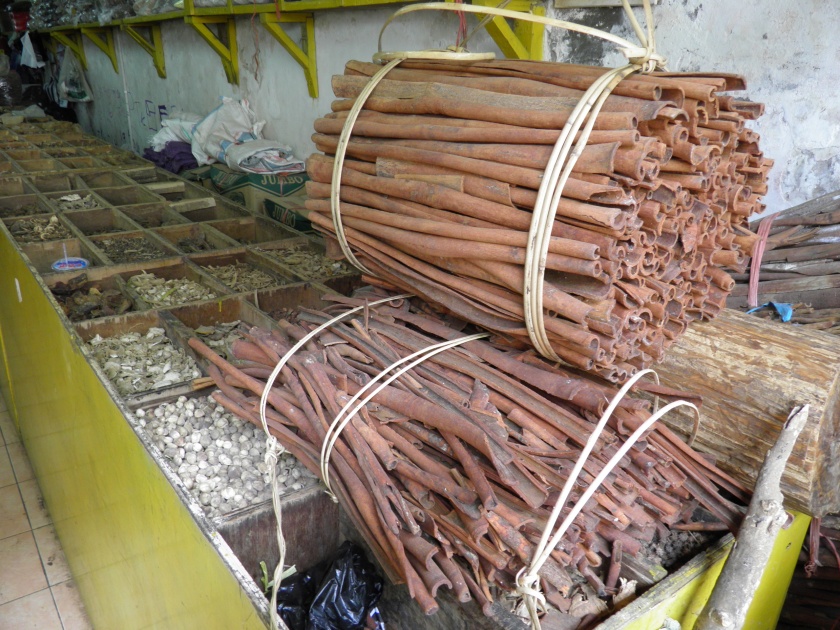 This is why you should wash your cinnamon sticks before you sprinkle it on your muffins.

If you are ever in Surabaya and have a half day to spare I would recommend taking the Johnny Walker tour.