I keep an envelope of old receipts at home in case I ever need them to support an insurance claim. I’m probably wasting my time keeping them because if the house goes up in flames, so will the receipts. Anyway I was looking through the envelope for something when I came across a receipt for a Shirvan carpet which I purchased while on a business trip to Tehran in 2002. 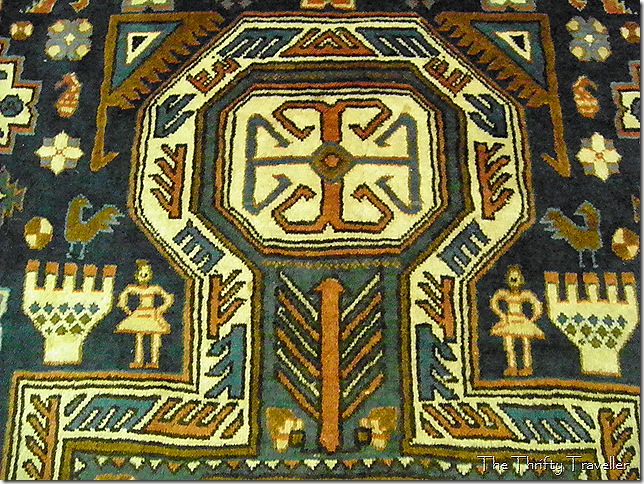 I still have the rug. It is made of soft lambs wool and it is slightly faded because the dog likes lying on it. I chose this rug because of its unusual design – it is not common to see motifs of humans in Persian rugs.  I didn’t realise till later that it isn’t a Persian rug – Shirvan is in Azerbaijan, not Iran.

I dug out some of my old, pre-digital photos from my trip to show you.

I bought the carpet from this shop. My colleague, who was based in Tehran at the time, took me along there are and helped negotiate the price. He assured me I was being ripped off less than the average tourist.

Since I did not have enough cash with me, Mr Reza trustingly let me take the carpet away and said I could send him the money when I returned to Dubai, which I did. Come to think of it, I hope my little remittance was not one of the Iran sanctions-busting transactions that HSBC has recently been heavily fined for!

The carpet bazaar was located in an alleyway inside the Grand Bazaar which I thought was a fascinating labyrinth of  shops and stalls selling glassware, ceramics, metal items, fruit, nuts, clothing, sweets and so much more. It did not appear to have changed much since this 1873 illustration.

Although my visit was in early April there was still plenty of snow on the nearby mountains.

Coming from Dubai, the scenery and cool temperatures were a treat and everywhere I found the Iranians to be charming, friendly and hospitable. They may not have had the most judicious of governments for the past few decades but they are a civilised and sophisticated people with an ancient history. It’s time for Iran and the West to be friends again.