While driving into Kuala Lumpur on the elevated expressway from Putrajaya I have often looked down on a hexagonal shaped temple guarded by a pair of golden statues and thought that I must take a look at that place one day. Yesterday I finally did.

The temple is located in unfashionable Pudu district, where the scruffy end of Jalan Tun Razak  meets Jalan Peel (a street named after a colonial administrator and former Governor of Hong Kong, Sir William Peel.  Peel Rise, where I often used to walk in Hong Kong, was also named after him.)

The temple is a fairly modest construction, rather like a stunted pagoda, said to have been built in 1957, which makes it the same age as Malaysia.  There are both Thai and Chinese Buddhist influences in its design and decoration.

The large gold-coloured statues guarding the entrance are supposed to be Kylin (Qilin), Chinese mythical creatures sometimes described as tiger or lion bodies with dragon heads but other times as deer with horns and scales.  Kylin are meant to have hooved feet like the one on the Kirin beer label whereas these statues have clawed feet. 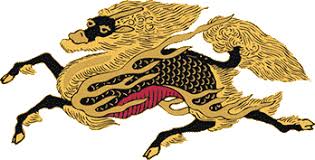 Whatever they are they look imposing.

The Buddha Jayanti Festival (which falls in April/May) is the most sacred day in the Buddhist calendar as it was the day on which Buddha was born, attained enlightenment and reached Nirvana (died) – a triple coincidence. On this festival, Buddhist devotees reaffirm their faith in the five principles which are:

They seem pretty good principles to me although abstaining from alcohol is quite hard for a lot of us. Perhaps convicted London rioters and looters should be sent to Buddhist monasteries for a while to improve their moral outlook.