Carey Island (Pulau Carey) is probably not what most people have in mind when they imagine a tropical island. There are no swaying coconut palms,  azure waters or golden beaches here. Well that is not quite true, there is a grubby, muddy beach and there are millions of palm trees on this huge island but they are all regimented rows of oil palms. Covering 32,000 acres on the coast of Selangor, Malaysia about 60 km west of Kuala Lumpur, this flat-as-a-pancake island is almost exclusively given over to oil palm plantations, palm oil refineries and bio-diesel production.

From a tourism point of view the island’s main attraction is the Mah Meri community whose craftsmen are famous for their highly prized wooden carvings. The Mah Meri are one of 18 Orang Asli tribes living in Malaysia ( Orang Asli meaning the original people of Malaysia). Numbering around 1400, this tribe is concentrated around Kampung Sungei Bumbun on Carey Island. Speaking a language with Mon-Khmer roots, the Mah Meri (meaning forest people) live in modest wooden houses and try to hang on to their traditional culture through practices like carving wooden spirits, traditional dances and music. 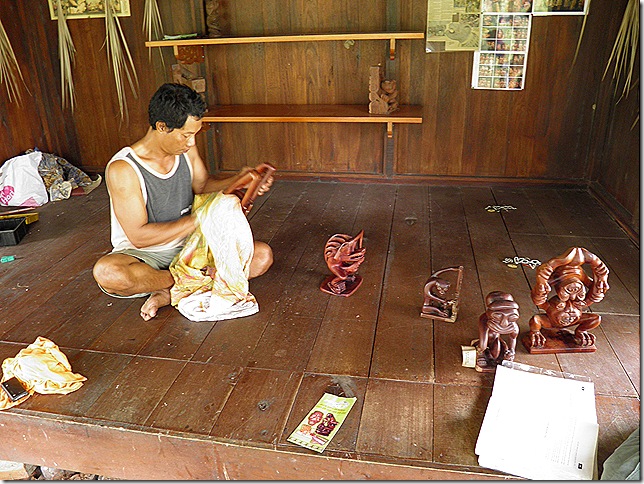 Mr. Gali Adam, one of the 25 or so craftsmen doing this work, showed us a book illustrating the 100 different spirits that he carves. These spirits play an important part in their way of life. Some for example were used by medicine men to draw sickness out of the infirm. The sculptures were thrown away after the medicine ceremony as they were believed to contain the sickness. This practice has added to their rarity.

Pregnant Mah Meri women are not permitted to enter the workshop area in case their unborn child acquires the characteristics of the sculptures.

The carvings are made from nyireh batu, a red, rare mangrove hardwood from the mahogany family. When I asked Mr. Gali Adam what would happen when his stock of logs at the back of the shop is finished, he pointed to a small sapling growing nearby. It will take 15 years to mature. Sime Darby, the company which operates the oil palm plantations on the island, is replanting some nyireh batu seedlings as part of the palm oil industry’s efforts to improve its sustainability record. Environmentalists, particularly from the West, frequently criticize the palm oil industry for its impact on rainforests, climate and everything else but it should be remembered that it was the eponymous Valentine Carey, a successful British coffee and rubber planter, who first started clearing the forests from Carey Island just over 100 years ago.

This carving, on the left, is called the Spirit Katak Kala and is said to represent a powerful frog holding an evil scorpion. I cannot quite see it myself but the natural sheen of the wood stands out well. After some bargaining he gave it to me for RM550. The Thrifty Traveller does not normally fork out that kind of money on an impulse purchase but the way I look at it is:

I think it looks rather nice!