Highland Towers was a development of three blocks at the foot of a hill in Taman Hillview on the eastern edge of Kuala Lumpur.

In the early afternoon of 11 December 1993, after a couple of weeks of unusually heavy rain, the retaining wall behind Block 1 gave way, unleashing a landslip of thousands of tons of mud and rubble, toppling over the 12 storey block and killing 48 of its residents. Only 3 people were pulled out of the ruin alive, one of whom died subsequently died of her injuries.

This is the photo from the front page of The Star newspaper at the time. 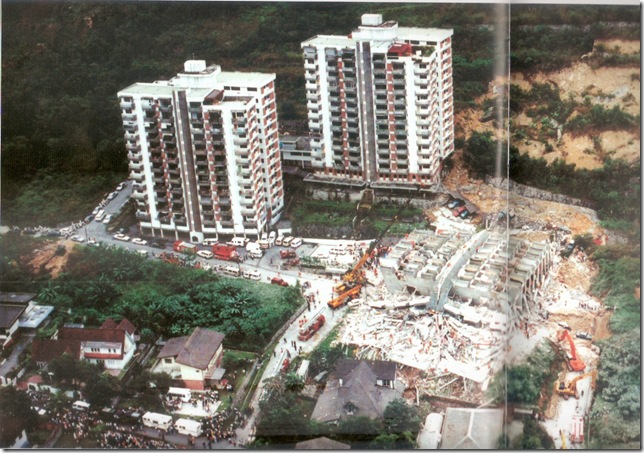 I drove up to the site today and parked my car next to the white house at the lower centre of the photo.

The two remaining towers still stand abandoned and derelict. They were evacuated immediately after the tragedy and deemed unsafe for occupation.

Where Block 1 once stood is now dense with vegetation as the jungle has gradually reclaimed the site.

Blocks 2 and 3, stripped of anything of value, are slowly decaying as they await demolition. Given the unstable condition of the hillside you would have thought they should have been demolished long ago for the safety of those living in the houses nearby. 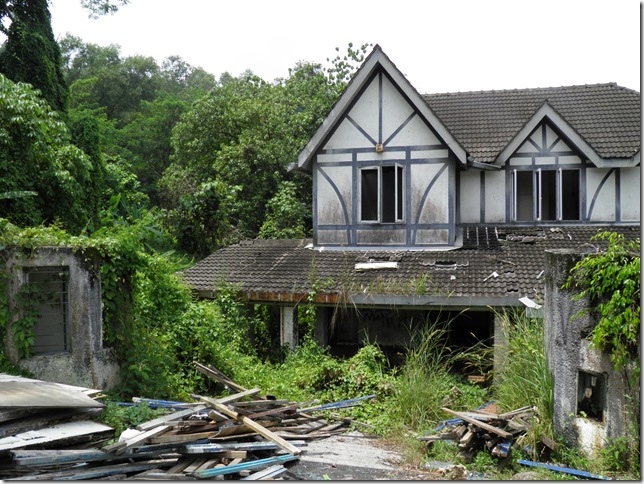 This house is the one in the bottom centre of the top photo which just escaped being crushed by the toppled tower block.  Now it is abandoned by its occupants and who can blame them?

My son’s university buddies tell him that Highland Towers is the most haunted place in Malaysia. I don’t know about that but the deserted blocks do have an eerie feel to them.

I noticed that some workmen appeared to be preparing a site for construction very close to the Highland Towers development. I hope the builders have learned the lessons of the tragedy and do not repeat the same construction errors.