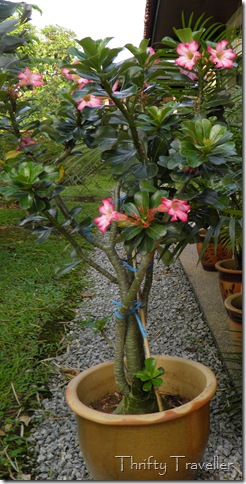 A few years back we acquired a pretty pot plant which we think is called Desert Rose (adenium obesum).

Even though the Malaysian climate is damper than its native Africa or Middle East, the Desert Rose has looked after itself and grown steadily fatter while blooming all year round.

So it was annoying to see it looking very sick the other day with almost all its leaves gone.

On closer inspection I found nine chubby caterpillars gorging themselves on the few leaves left on the bush.

Eight of these insects were orangey brown while one was green. Perhaps they have the ability to change colour to blend in with their surroundings, like chameleons. They must have strong stomachs because the sap of this plant is said to be deadly poisonous to humans and animals.

Don’t know what type of butterfly or moth these creatures will transform into but I didn’t want to kill them so I carefully prised them away from their meal and deposited them outside the perimeter of my garden. Not sure if our desert rose is going to recover. Pests!