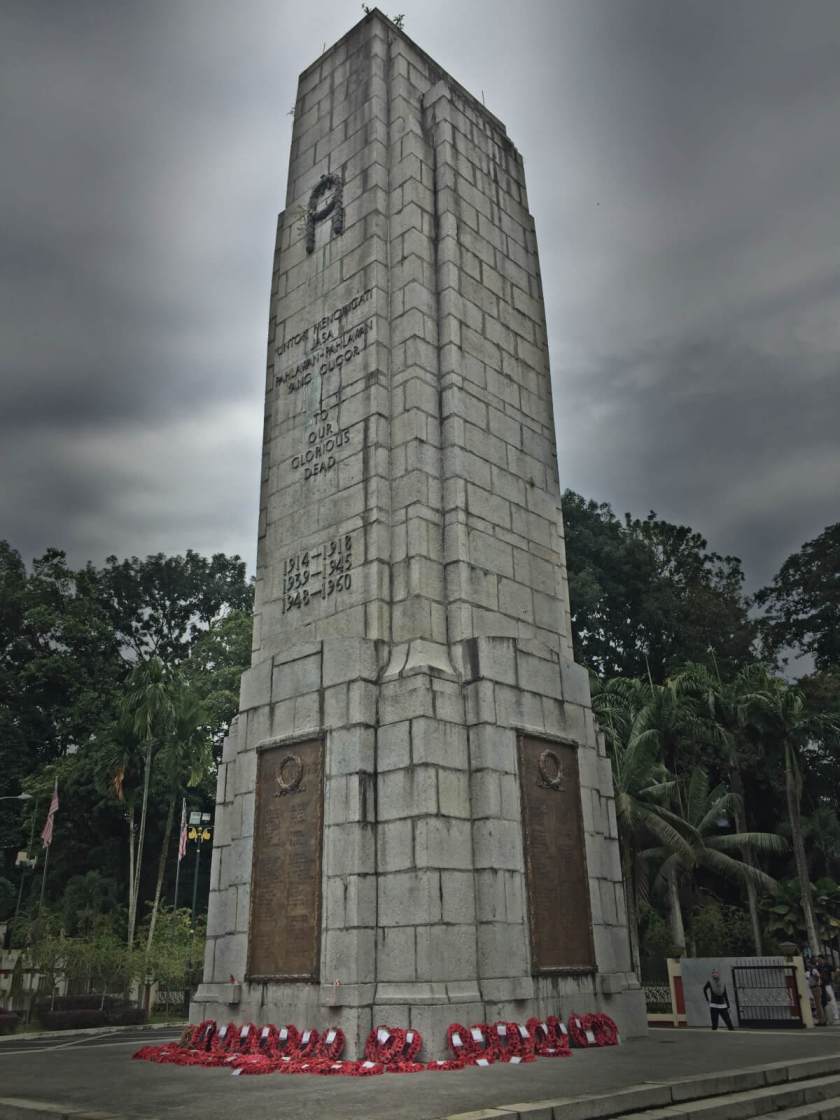 Following the recent Remembrance Day ceremonies marking 100 years since the end of World War One I thought I would relook at our own cenotaph here in Kuala Lumpur.

This simple granite monument was unveiled in 1924 as a memorial in tribute to those who lost their lives in that war. It was designed by the architectural firm Stark & McNeill with offices in Penang, Ipoh and Johor. It used to stand on Cenotaph Road (Jalan Tugu), off Victory Avenue (Jalan Sultan Hishamuddin) outside KL’s famous railway station but it had to be shifted in 1961 to make way for a flyover and the cenotaph now stands proudly at the Tugu Negara (National Monument) garden near Kl’s Botanical Gardens.

Each of the four sides of the monument displays a bronze tablet engraved with the names of the fallen from WW1 (mostly British and Indians fighting for the British).

Compared to World War Two, which affected Malaya severely, Malaya was not greatly impacted by the First World War. Apart from a German naval attack on Penang there was no fighting in the country. Indeed the economy of Malaya experienced a boom as its main exports, rubber and tin, were in great demand. The British working in Malaya at the time were playing an important role in the war effort by supplying the home country with vital commodities and there was no obligation for young British men to go home and fight. Even so, many felt the need to volunteer and play their part and a good number paid the ultimate price. 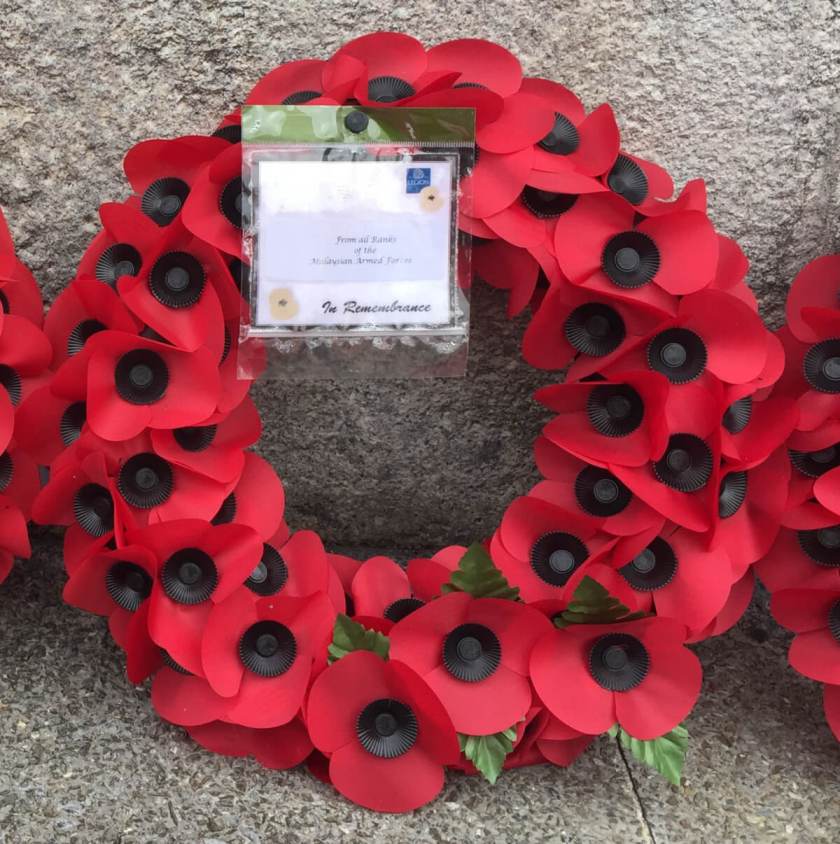 Every year on Remembrance Sunday the British High Commission hosts a service of remembrance at Tugu Negara for those who served in both World Wars, the Malayan Emergency and other conflicts.  Representatives of various Commonwealth countries and other organisations leave poppy wreaths here.

Trawling though the internet I can find no list of the names inscribed on the KL cenotaph so I am including photos of each of the four plaques in case they are of use for people tracking down lost ancestors. I have also tried to find details of one name from each plaque, so that these souls at least know that they are not entirely forgotten.

We always say ‘We Will Remember’ and indeed we do remember the terrible cost paid by that generation but as the years have passed we are inevitably losing our collective memory of the individuals. There is probably nobody left alive today who personally knew anyone who died in that war. 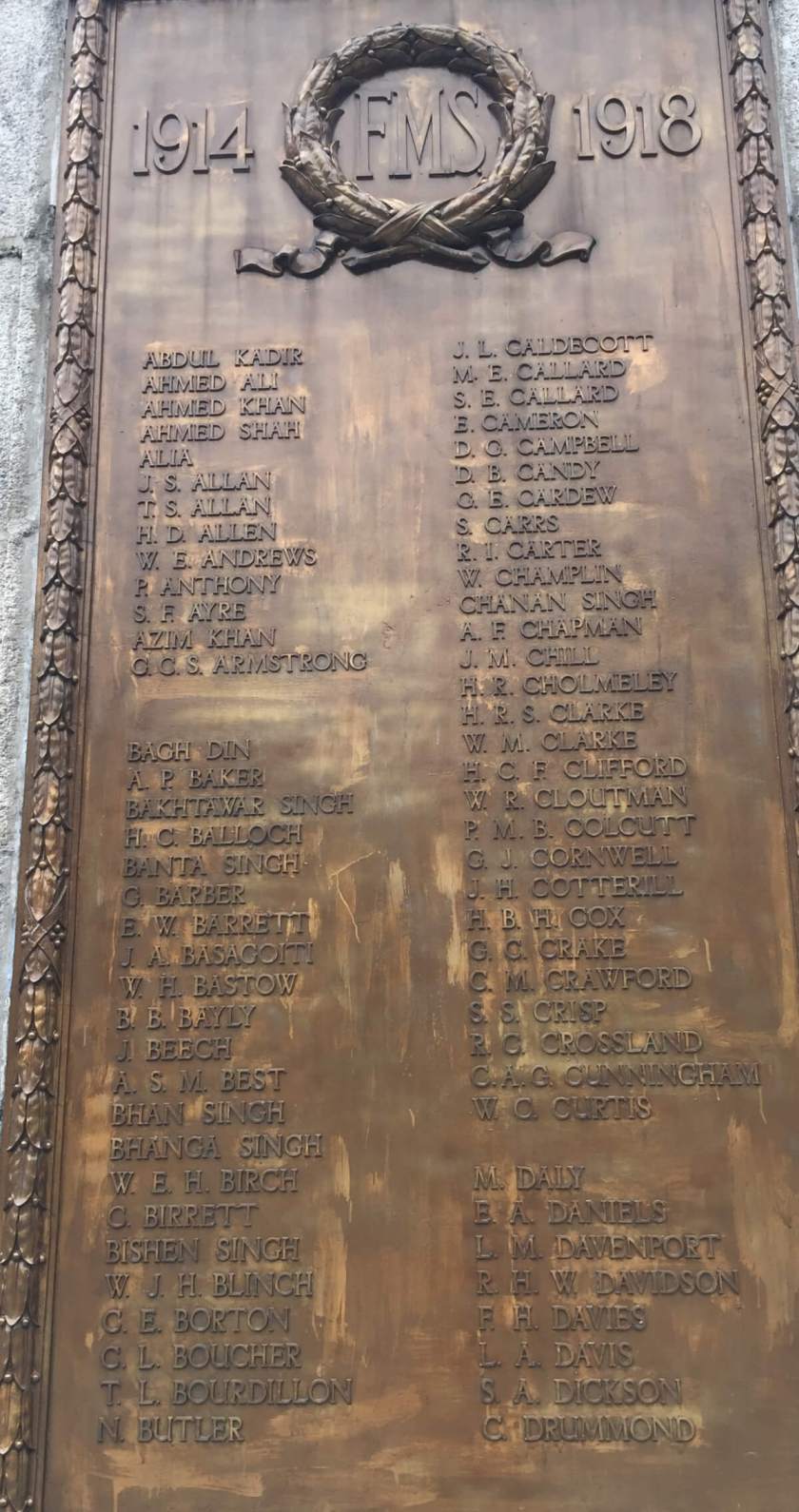 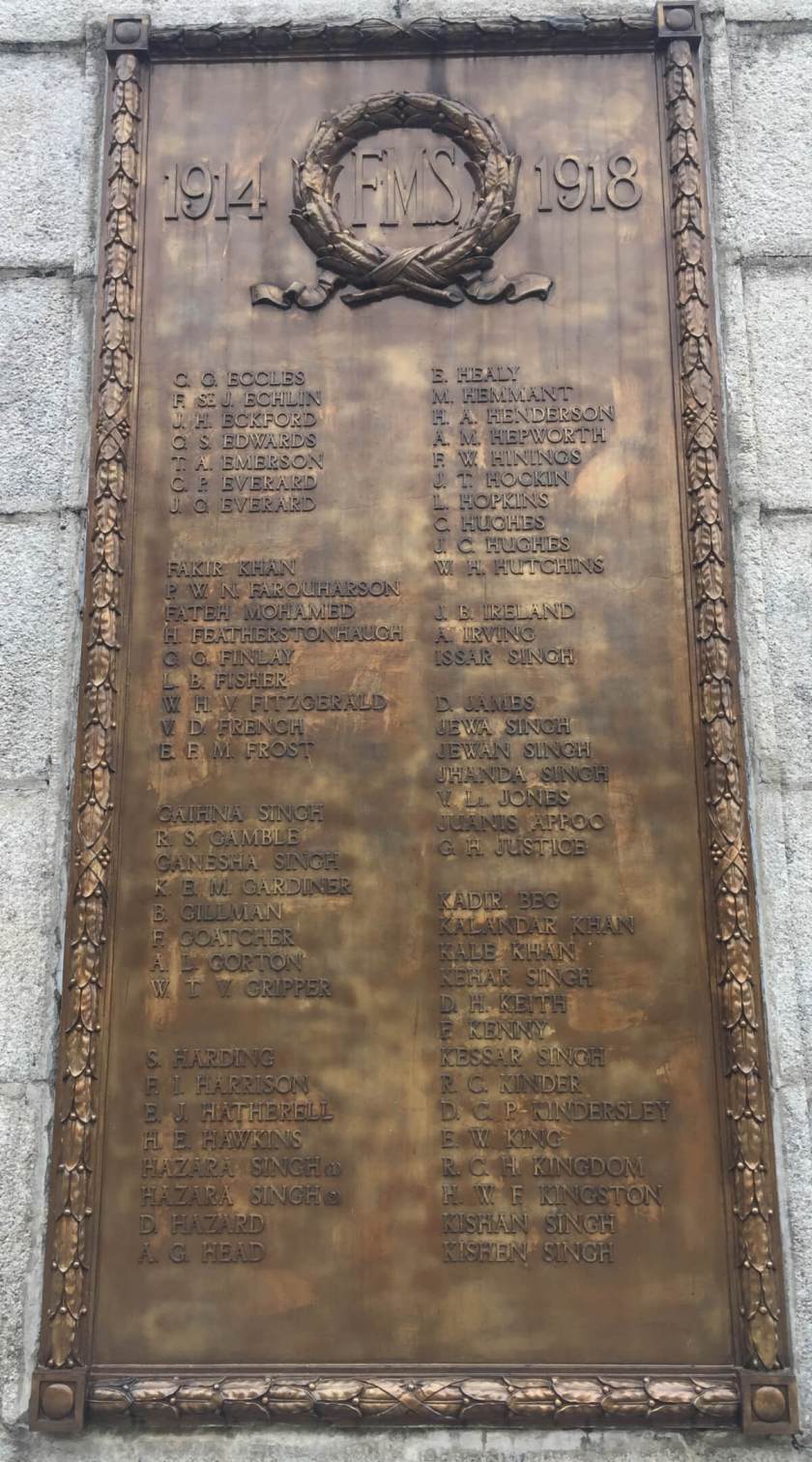 Lieutenant Frederick St John Ford North Echlin died of wounds on 27 September 1916, aged 27. He was from Echlinville in Northern Ireland which today is home to a whiskey distillery of the same name. He had not long been married, to Dorothy Blanche Echlin (nee Dobree) of Guernsey, and they had one child. Prior to the outbreak of the Great War Frederick Echlin had been working in the Federated Malay States. He volunteered for service and was commissioned on 6 March 1915 to the 5th Battalion Royal Fusiliers. He joined the Royal Flying Corps on 27 October 1915 and became a pilot. He was buried in Achiet-Le-Grand Communal Cemetery Extension, France.

Eric Herbert Justus Maule-Ffinch was a Second Lieutenant killed in action near Bray, France on 27th August 2018 aged just 18. He served with the 7th (Res.) Batt of the London Regiment. He is buried at Bray Military Cemetery. Son of Knightley Heneage Mauleffinch and Evaleen Massie Maule-ffinch (nee O’Dowd), of Hendon, London. Joined the Malay State Volunteer Rifles at 17 years of age

Uttam Singh. It is hard to be sure due to many soldiers with a similar name but the only Uttam Singh with a Malayan connection listed on the Commonwealth War Graves Commission’s website is Sepoy Uttam Singh of the Malay States Guides who was killed on 9 December 1915. Son of Sher Singh of Tangri, Tarn Taran, Amritsar, Punjab. His name is commemorated on the Heliopolis (Aden) Memorial in Cairo. The Malay States Guides saw action in Aden in 1915 against Turkish soldiers threatening the British-controlled city.