Perlis is by far the smallest of Malaysia’s 13 states with an area of just 821 square kilometres and a population of about 250,000. It is also the northernmost state and is surrounded by Thai territory to the west, north and east. Nowhere in Perlis is further than 15 – 20 km from the Thai border.

Kuala Perlis is the state’s second largest town after Kangar, the state capital. It is located on the mouth of the Perlis River and it has the closest ferry terminal for those wishing to travel to Langkawi (a 75 minute journey costing RM18 one way).

There are a few modern restaurants and budget hotels near the terminal  but apart from the ferry jetty I would have to say that there is not a great deal to attract the tourist. The older part of the town is built on stilts over what was once mangrove swamps but the mangroves seem to be struggling. 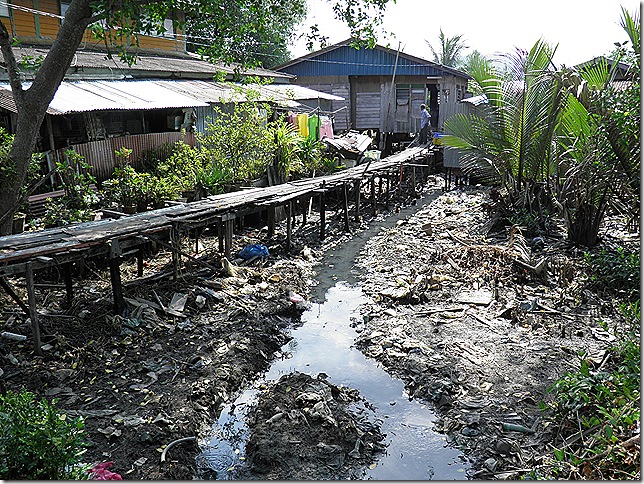 I followed a few pedestrians over a rickety bridge crossing the estuary to get a better view of the town.

Only later did I work out that the sign says Caution: Bridge is closed to all users due to safety reasons.

It is quite a busy fishing port. Kuala Perlis is supposed to be famous for its seafood restaurants with popular dishes such as ikan bakar and assam laksa.

Looking at the condition of the water and smelling the rather overpowering stench I was not feeling hungry. Kuala Perlis would really benefit from a more efficient rubbish collection service.

Here the river is saying ‘I just can’t swallow any more of your garbage – take it back!’