There are many good things about living in Malaysia but there are also one or two negatives.

Last week I saw Sandy, one of my dogs, chasing something in the garden. Nothing remarkable about that – our dogs chase anything that moves: lizards, birds, squirrels, rats or cats.

I thought nothing more about it but, later that day, poor Sandy’s eyes were horribly sore, red and weeping. I took her to the vet who said that it might have been caused by a snake, the sort that sprays venom into the eyes of an aggressor when threatened.  We’ve applied medicines, lotions and ointment to the eyes. One eye seems to be fully recovered but the other still looks in poor shape.

Today I got confirmation that it is indeed a snake. When returning from a bike ride I saw another of my dogs, Kit Kat, sniffing a shiny black snake coiled around a flower pot outside my front door.  I went to get my camera but by the time I returned I just saw it slithering away into the bushes of next door’s house. I reckon it was about 4 feet long or so long and about as thick as a good sized banana. Kit Kat seemed OK so I breathed a sigh of relief

A few hours later I heard our miniature poodle Custard barking frantically in the garden. I looked out of the window and to my horror saw a cobra just a couple of feet in front of Custard, with hood raised and poised threateningly as it tried to deter foolish Custard from coming any closer. I dashed outside and called Custard away from the snake which backed off. Custard has not been allowed outdoors after her lucky escape.

The snake looked just like this creature (photo taken from Ecology Asia website where you can read all the gruesome details): 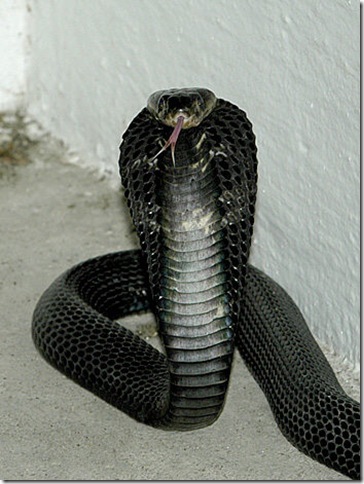 Tonight I see that poor Kit Kat has now also got an injured eye so it is back to the vet again.

I know the cobra is only trying to protect itself and I wouldn’t even know it was there if my silly dogs didn’t keep annoying it but I am feeling besieged in my own house knowing that something nasty is lurking in the garden.