During my recent visit to Malacca, I was interested to see how the town’s cycle rickshaws have transformed over the years.

This is how they look now, elaborately decorated with artificial flowers and fitted with a boom box under the seat playing noisy music. They don’t seem to stray far from the main square in front of Malacca’s old Dutch-era Stadhuis and Christ Church. The cycle rickshaw drivers prey on the coach loads of tourists and no doubt charge a good sum for a quick spin round the block or to pose for a photo.  Who can blame them? They have to make a living somehow and there is not much money to be made these days from cycle rickshaws as a means of public transport.

It was not always so. When I first visited Malacca way back in 1983, cycle rickshaws (or trishaws, or pedal rickshaws, or pedicabs or tricycles as they are also known ) were still used as a poor man’s taxi and they were a charming, unhurried way to get around the town centre which those days had far less traffic.  From a trishaw you could get a close up view of the streets and ask the driver to pull over anytime something interesting caught your eye. You were more in tune with the leisurely pace of  Malacca which was a very relaxed place at that time.

I was reading an article about trishaw drivers in Teluk Intan in Perak. This town is home to Malaysia’s equivalent of the Leaning Tower of Pisa (a pagoda-like clock tower with a distinct tilt). This architectural oddity attracts visitors but not in sufficient numbers to sustain the cycle rickshaw drivers, of whom there were (in 2009) only four left and of these, three were in their seventies.  Apparently they can only earn around RM300 per month (less than USD100). They have to pay RM18.50 for an annual permit. The local trishaw licensing office must be one of the sleepier government departments as they have not issued any new licenses for decades.

It is sad but inevitable that the trishaw, as a means of public transport, is facing extinction in Asia. The only hope is that larger parts of historic heritage sites like Malacca and Georgetown (Penang) can be pedestrianised thus making the conditions right for trishaws. Of course they would have to charge tourist rates, which reach about RM30 per hour in Penang. This might attract younger people like students to do a bit of healthy trishaw driving in their spare time.

I have encountered a number of different trishaw designs in my Asian travels. Malaysia and Singapore have the driver sitting to the side of the passengers like the one pictured above.

In Macau in the early 1980s, it was quite normal to take a triciclo from the ferry terminal to somewhere like the Lisboa Hotel or Henri’s Galley, our favourite restaurant for giant prawns or African chicken. The tricilo fare was cheaper than a taxi and we would always negotiate the fare before getting in. But by the end of the journey, after staring at the driver’s sinewy calf muscles, we would often feel sorry for him and end up paying a generous tip.

Vietnam in 1993 was an ideal place for trishaw travel as there was very little traffic in those days apart from bikes. This very basic looking cyclo (as they are known in Vietnam) was typical of those found in Hanoi, where the design was lower and wider than those in Saigon. Hanoi cyclos could hold two people (slim ones) while Saigon’s were single seaters. They may have only carried one person but they could accommodate quite a few geese. 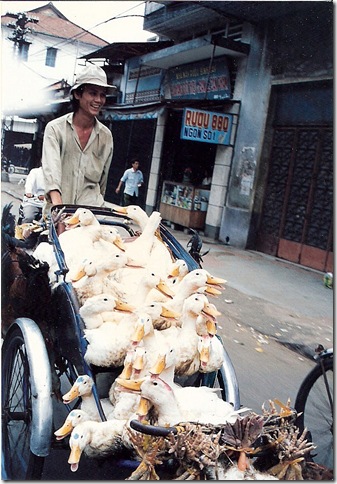 Nowadays in Vietnam, the slow and cumbersome cyclo is banned from more and more places as they obstruct the cars, trucks and motorbikes which have multiplied rapidly in recent years. This is more or less the pattern all over Asia, though I understand that in Dhaka, Bangladesh (which I haven’t visited yet) the trishaw is still going strong, apart from on the major roads.

Ironically in the West, the cycle rickshaw has made a bit of a comeback where it seen as an eco-friendly and healthy occupation and ultra modern designed trishaws have apparently set up shop in places like London, New York, Germany and Ireland.