Nineteen years ago while visiting Melaka (Malacca) my wife and I purchased a tiny pair of silk-embroidered bound feet shoes.

Just 3 inches long, these shoes were of the sort worn by countless of Chinese women over the ages. The ancient practice of binding the feet of girls while still only three or four years of age had once been quite prevalent in Malacca and in the 1920s it was reckoned that as many as 1,000 women in the town had bound feet. The practice was seen as feminine and dainty and more importantly as a symbol of wealth and status.

We bought them from Wah Aik Shoemaker of 92 Jonker Street. I know this because it was stamped on the soles of the shoes and the proprietor kindly signed them for us as you can see from this photo which I took at the time.

By 1992, according to the owner, there were only half a dozen old ladies left in Melaka with bound feet – not really enough to sustain a shoemaking business which could account for the somewhat shambolic appearance of the shop. I suppose cobbling for crippled concubines is a good example of a sunset industry.

Returning to Melaka last weekend I thought it would be interesting to see if the shop is still there.

Not surprisingly it is no longer at 92 Jonker Street. Jonker Street, or Jalan Hang Jebat to give it its modern name, is the main tourist shopping strip in Melaka and premises there must be prime real estate.

Luckily though, not far away in Jalan Tokong I stumbled across this shop: 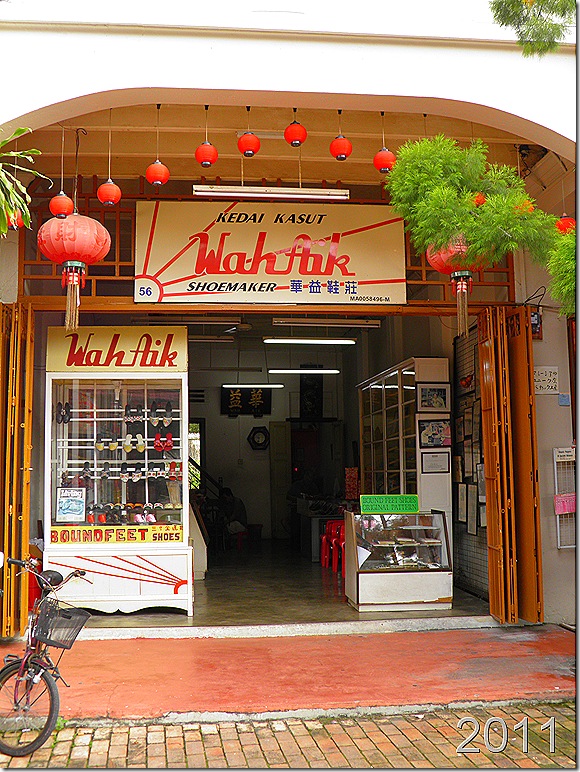 Could it be the same business? I went inside and noticed that the display cabinets looked the same and I showed the old photo to a gentleman working there. He told me he was the son of the former owner who had since passed away. The shop had moved to this location some years back and they had taken the old shelving with them.

He said there were no more bound feet ladies in Melaka and the bound feet shoes were now only made for tourists. I think nowadays they probably concentrate on selling beaded slippers (another unique Melaka product).

We should not mourn the passing of the barbaric practice of foot binding. Of course modern women still like to squeeze their feet into painful stilettos and the like but at least they can take them off when they want.

The son was pleased to see the old photo of his father and he introduced me to his brothers who also work there. Business is obviously improving!

Update as at April 2018: Since writing the above article, Wah Aik Shoemaker has moved again. It can now be found at No.92 Jalan Tun Tan Cheng Lock (Heeren Street).