This post records the final section of my coast to coast journey across Malaysia via Cameron Highlands, Gua Musang & Lake Kenyir. 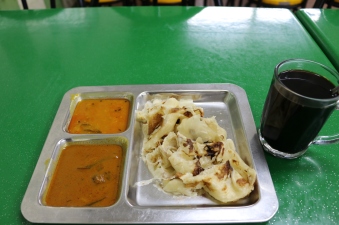 After a Thrifty Traveller breakfast of roti canai and kopi kosong for just RM2, I left Gua Musang for the nearby village of Pulai.

Kampung Pulai is famed for its Guan Yin temple, known as the Water and Moon Temple, thought to be over 400 years old, making it perhaps the oldest in Malaysia. Hakka Chinese settled here more than 600 years ago in search of gold and they maintained their traditional Hakka culture, largely undisturbed by the outside world until the first tarmac road to the village was built in 1988. 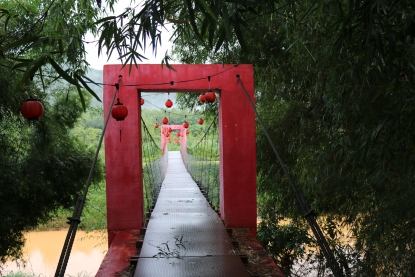 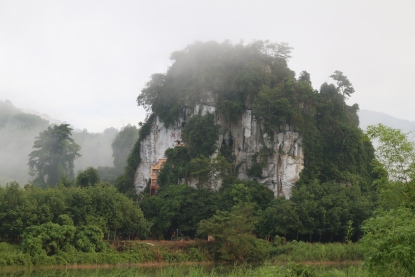 The village has a lovely setting, alongside a small river and a lake, surrounded by rubber plantations and overlooked by spectacular limestone hills. On the opposite side of the lake, facing the village is one such outcrop called Princess Hill which contains a cave with a Guan Yin statue. To reach the cave I crossed the suspension bridge over the river and walked around the lake. 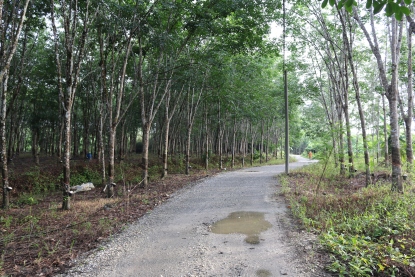 The rubber trees appeared to be well looked after with tapping still going on. There was a large buzzing hive of wild bees on one of the trees which I was careful not to disturb. 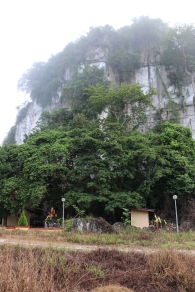 I arrived just as the elderly caretaker was unlocking the steps up to the cave. 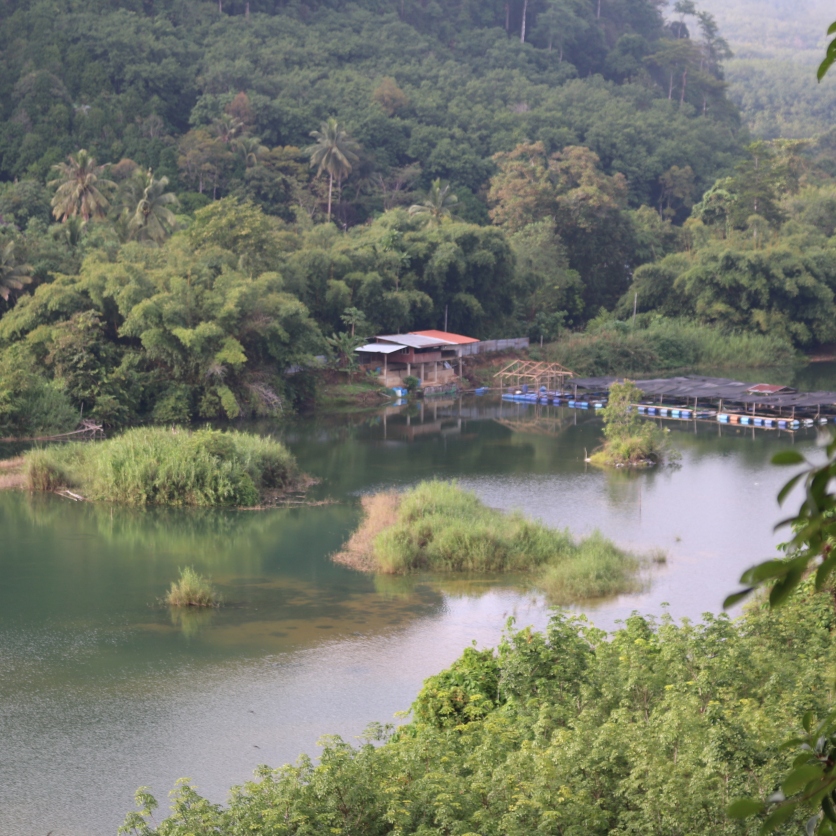 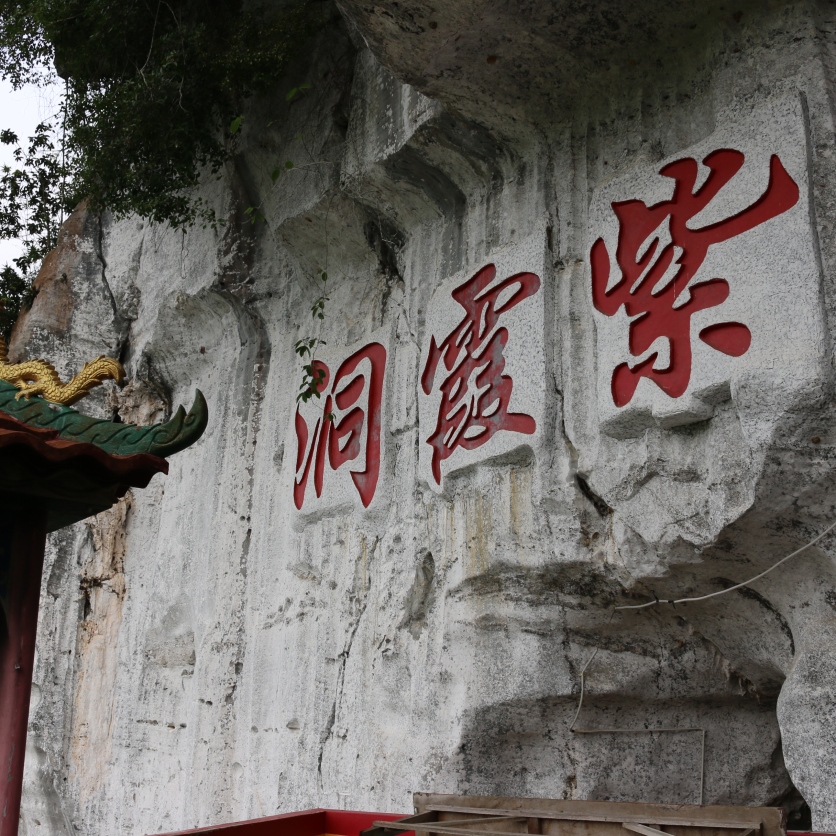 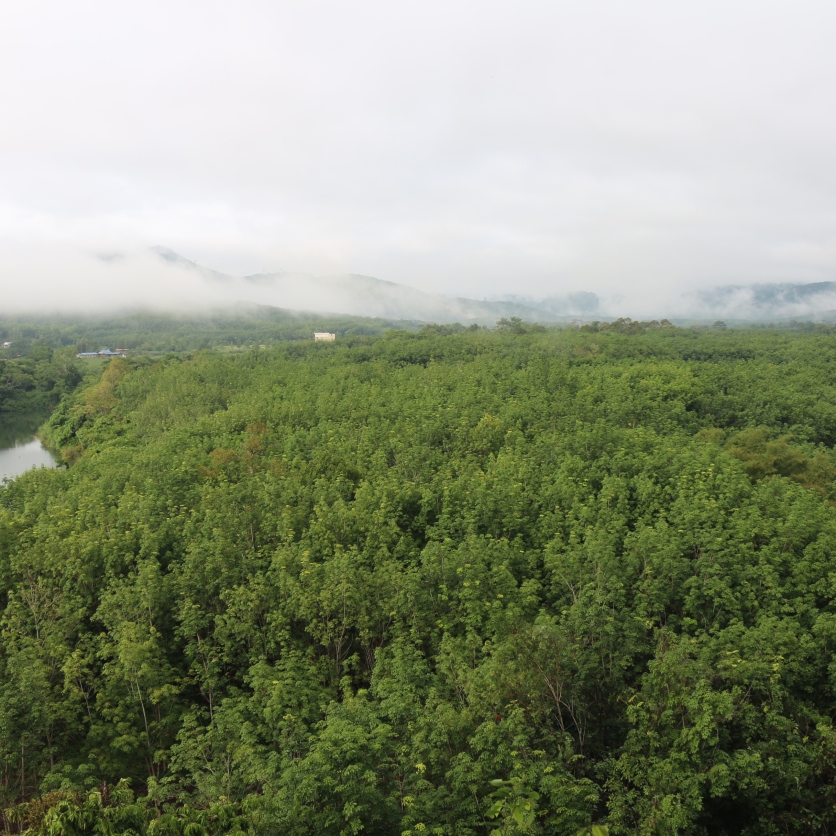 From the top of the steps there was a good view looking back over the village in the early morning mist.

Inside the cave were a couple of large stalagmite formations, one of which has been transformed into a Guan Yin statue.

After this slight detour I returned to my trans Malaysia route, leaving Gua Musang on the Central Spine Road (highway 8) for some distance before turning onto Jalan Felda Aring (1744), a minor road serving the Federal Land Development Authority (FELDA) plantations and settlements in this part of Kelantan. This was the section of the journey that I was most worried about because I was unsure what condition the road would be in and whether it would be passable. It would have been a long way back if I had to turn around. In the end my concerns were unwarranted because it was in excellent condition and with very light traffic it was a pleasure to drive. 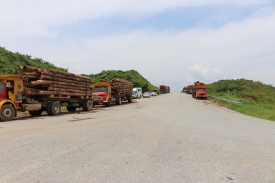 Throughout this trip I encountered a lot of logging lorries, far more than I remember seeing on previous travels. There are newspaper reports of rampant illegal logging going on in parts of Malaysia. I don’t know where these particular trucks obtained their logs. Most of the surrounding area looked like it was deforested some time ago to make way for palm oil plantations.

Crossing over from Kelantan into Terengganu brought more lush vegetation as I approached Lake Kenyir. This massive man-made lake was created between 1978 and 1985 by damming the Kenyir River. It is the largest artificial lake in Malaysia with an area of 260,000 hectares.

A new attraction near Lake Kenyir is the Kenyir Elephant Conservation Village. I didn’t go in but I gather it is somewhat similar to Kuala Gandah Elephant Sanctuary.

At the lakeside itself, activities include the Kenyir Water Park, boating and fishing. They have some rather ugly houseboats for rent here but I feel Malaysia Tourism could do a lot more to bring in tourists. Some Kerala style houseboats for example would be a good addition. The Lake Kenyir Resort Hotel was closed for renovation.

From Lake Kenyir, the East Coast of Malaysia is within easy striking distance. I would have chosen to end my coast to coast journey at Penarik which has one of best stretches of beach in the area. In the end I didn’t go to Penarik this time but continued my travels up to Kota Bharu as I had other places to visit which I’ll write about in future posts.